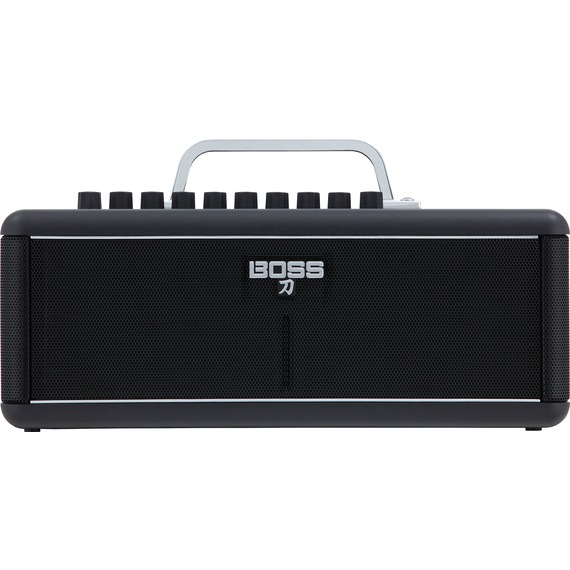 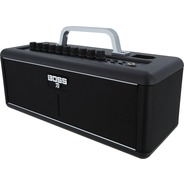 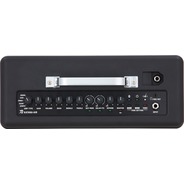 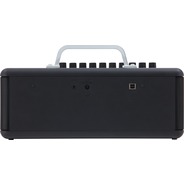 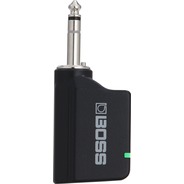 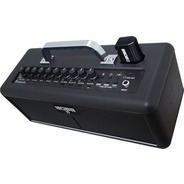 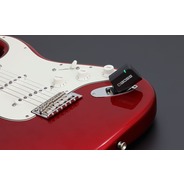 Taking tonal inspiration from its sister models, whilst also delivering a world's first...welcome the BOSS Katana-Air Wireless Guitar Amp. A battery powered (it can also run from mains power), convenient and inspiring guitar combo that gives you all the freedom to jam and play without the hastle of cables!

The Katana Air is the world's first wireless guitar amp. Utilizing BOSS' new low-latency digital wireless guitar technology you'll get access to a hastle free wireless guitar amp setup. Simply plug the included wireless transmitter (which ha sindicators for power and battery status) into your guitar, turn on the amp and your compact wireless rig is good to go! The amp also hosts a convenient docking port that charges the battery in the transmitter; a full charge gives you upto 12 hours of playing time.

Loaded wih the same tone and sound-shaping controls as the best-selling Katana amps, the BOSS Katana-Air packs an array of inspiring sounds into one super compact unit. The 5 amp characters gives you access to everything from sparkling cleans to high-gain sound, there is even an Acoustic setting for plugging in your electro acoustic guitar. In addition to the amp characters, the Katana Air gives you access to over 50 BOSS effects, including reverbs, delays, modulations and more. Six handy onboard memories gives you the ability to store and recall you favourite settings.

Katana-Air host a pair of 7.5cm speakers that delivers a punchy 30 watts of stereo power (20 watts in battery mode), not only great for big, rich guitar sounds but also handy when you want to stream music from your phone to it via Bluetooth. This not only makes for an easy way to jam along with your favourite tracks, but also allows the Katana-Air to be a handy portable, wireless Bluetooth speaker as the Katana-Air can also be powered by just batteries too!

The Katana-Air also includes a stereo headphones/recording output with guitar cabinet simulation, giving you access to great sounds via headphones or when you want to plug straight into your DAW.

Thanks to its portable size, wireless connectivity, and great sound, the BOSS Katana-Air is a great companion for travel, parties and jam sessions!