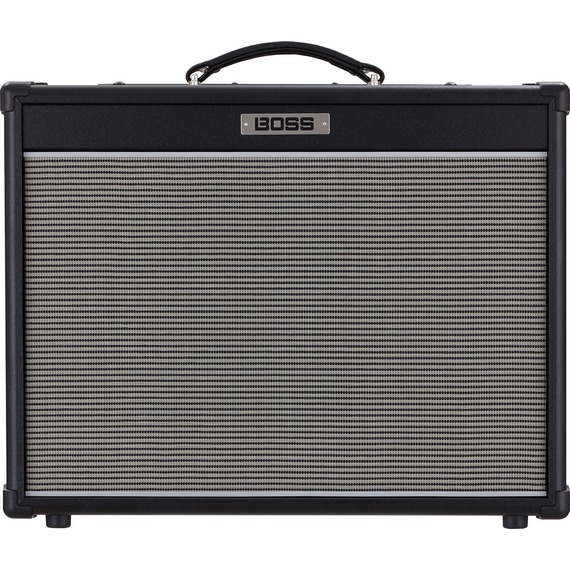 Although there are no real tubes in sight, the BOSS Nextone Stage manages to deliver the sound, feel and tone that only a tube amp can, all thanks to the Tube Logic design. Acclaimed by guitarists everywhere Tube Logic tone reproduces the complex interactive behaviours of tube design, allowing for the great thing we love about tube amps but without the downsides, like unreliability, heavy weight and on-going maintenance.

At the front end the Nextone Stage features a 2-channel design, Clean and Lead, followed by a shared 3-band EQ and presence control. In addition to this, there are Boost and Tone switches which allow for some extra gain and added sparkle. Next we have the effects section with dedicated controls for Delay (with a tap button) and Reverb. Things start to get really exciting at the Power Amp Select section...

With any traditional tube amp, the preamp is there for basic tone shaping, but the power amp design is where the signature tone of the amp comes through. The Nextone Stage's Power Amp Select section gives you the ability to re-voice its analogue Class AB output stage with one of four classic designs:

6V6 - The 6V6 known for its sweet, crisp tone with good amounts of organic compression. These tubes are the heart of many classic low wattage "Amercian" amps.

6L6 - These are used in classic "American" stage amps and for some high gain models, delivering plenty of punch with a full, round tone.

EL84 - As used in legendary "British" combo amps, able to produce creamy distortion when cranked, yet chimey and glassy at lower volumes.

EL34 - The tube found in those iconic British stacks - delivers a warm fat tone with that rock crunch heard the world over.

Sometimes getting "that" tone requires you to push you amp to levels that are just not suitable for the environment that your are in. BOSS have taken that into account and fitted an adjustable power control that will take the 40w output down to half (20w) or 0.5W...perfect for get that cranked-amp sound without annoying the neighbours!

Press the Custom button and you'll put the amp into Custom Mode, instantly delivering a factory tweaked variation of the standard Clean and Lead channels, but it doesn't stop there! You can fine tune this mode with the Nextone Editor software, giving you access to tweak a whole host of settings including EQ, bias, sag, effects and more! You can then store up to 99 different user setups for recall.

Other appointments and things of note include adding an optional footswitch (GA-FC) for floor control, a line out for sending direct to a PA, a phones/recording out for silent practice/studio work and USB connectivity for direct recording and for connecting to the Nextone Editor software.

The BOSS Nextone Stage is a superb amp, producing a selection of classic valve tones that can be tweaked and moulded to suit your style, all whilst delivering superb reliability in one, compact lightweight form.