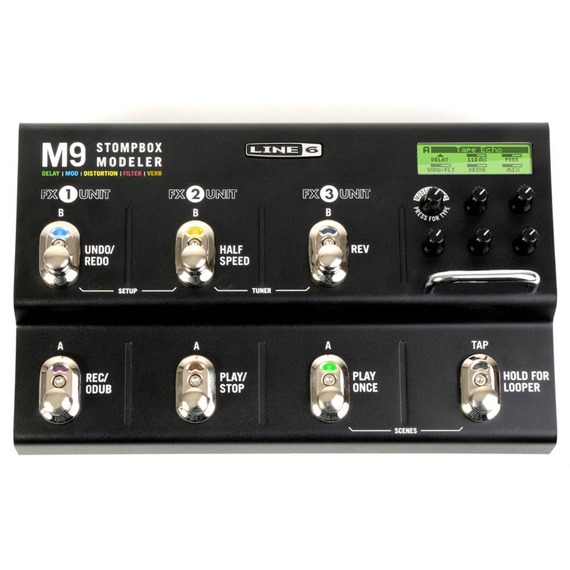 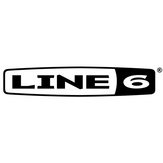 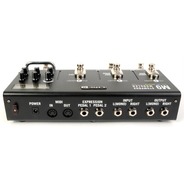 The Line 6 M9 Stompbox Modeler has the stunning stompbox tones, old-school simplicity and necessary portability you need in an all-in-one stompbox solution. Spark your gear lust with over 75 immortal modern and vintage stompbox effects, a 28-second looper and a whole lot more!

Each model was inspired by a legendary stompbox tone and carefully crafted to produce all the tonal colors and nuances made famous by the original.

3 FX Units in One
M9 Stompbox Modeler is three FX Units in one. Three effects can be used simultaneously, with three more at the ready. With 100% control over effect type and arrangement, you are free to use one effect at a time, arrange them into tried-and-true combinations or create your own original blends.

Different stompbox arrangements, or "scenes," can be created for each of your gigs--one for your metal band, one for your punk band, one for your Top 40 gig... you get the picture. No more tearing up Velcro(R) just to switch out one or two pedals. Create and save up to six scenes. (Scenes can be backed up to your computer via MIDI in/out.)

Stompbox Simple
M9 Stompbox Modeler is easy to use, just like a classic stompbox. Tweak your tones on the fly using the dedicated knobs. No menus, no saving, no hassles--just turn the knobs and you're done. And your settings remain when you power down!

The bright LCD shows parameter names/values and the built-in chromatic tuner. (When activated, the tuner mutes the output signal.)

Built-In Looper
The most fun you'll have without doing something illegal, the 28-second looper delivers extended, in-the-moment looping and unlimited sonic possibilities. Looping has never been easier with dedicated footswitches for all looper controls: Record/Overdub, Play/Stop, Play Once, Undo/Redo, Half Speed and Reverse. (The looper and the FX Units can be used simultaneously.)

In, Out & Through
M9 Stompbox Modeler is ready for anything with its full arsenal of ins and outs. 1/4" mono/stereo inputs and outputs (with True Analog Bypass or DSP Bypass) let you put M9 Stompbox Modeler before, after or in between your other pedals. Connect a pair of expression pedals to the two 1/4" expression pedal jacks to morph smoothly between tones and control the new Pitch Glide and Wah models. MIDI in/out, which is perfect for backing up your "scenes," also makes M9 Stompbox Modeler compatible with many popular MIDI control systems.