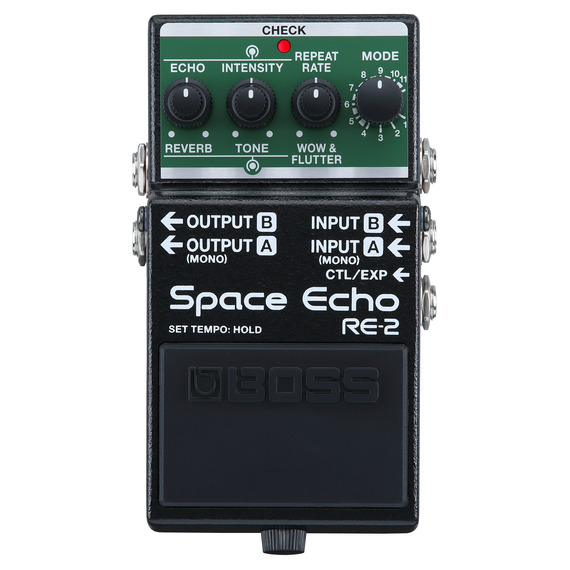 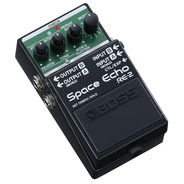 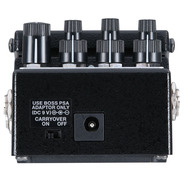 Get a legendary Roland RE-201 Space Echo experience in a pedalboard friendly BOSS compact pedal with this Roland RE-2 Space Echo Delay Pedal.

Introduced back in 1974 and produced for over 14 years, the Roland RE-201 Space Echo stands among the most legendary and sought-after effect units in music history as has been used and heard in may studios and classic songs the world over.

Equipped with three evenly spaced tape heads and a spring reverb tank, it could produce everything from clean, single delays to dense, rhythmic echoes and ambient washes. The RE-201s appealing sound was influenced by many factors, from the warm compression of magnetic tape saturation to the evolving modulation produced by motor speed fluctuations, friction, and other elements. Last but not least, analog preamp circuitry was a key ingredient in the Space Echos rich sonic recipe.

Now with the BOSS RE-2 you get access to that coveted Space Echo magic in a compact pedal realised in flawless detail thanks to intensive R&D and latest technology innovations.

The RE2 Space Echo features an 11-position mode selector allowing you to dial in different tape heads both with or without the spring reverb, The dedicated dual Echo/Reverb knob allows you to balance the independent levels of each.

All of the charms of the RE-201 are here, such as the gradual pitch changes when your tweak the Repeat Rate, or the runaway feedback when you dial in more of the Intensity. And with the Wow and Flutter control you get access to that natural modulation that is essential to the Space Echo sound!

The RE-201 is a true legend, and now you can get access to some of that Space Echo goodness in one, compact unit - the BOSS RE-2 Space Echo!