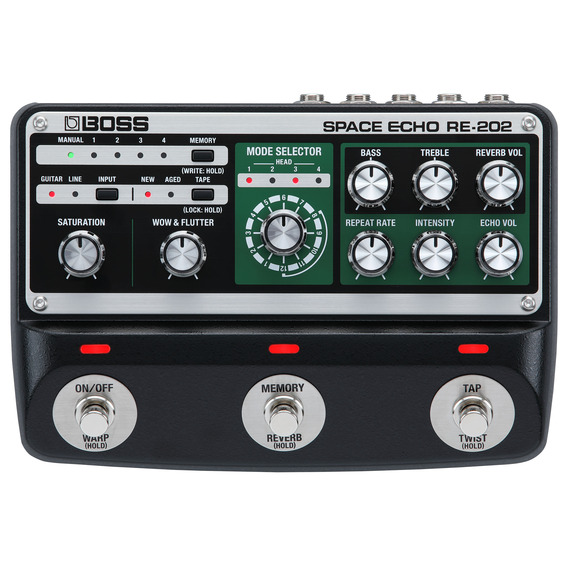 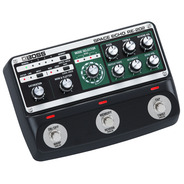 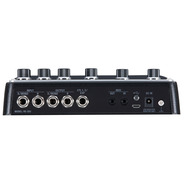 Recreate the sound of the legendary Roland RE-201 Space Echo and take things even further with the BOSS RE-202 Space Echo.

Introduced back in 1974 and produced for over 14 years, the Roland RE-201 Space Echo stands among the most legendary and sought-after effect units in music history as has been used and heard in may studios and classic songs the world over.

Equipped with three evenly spaced tape heads and a spring reverb tank, it could produce everything from clean, single delays to dense, rhythmic echoes and ambient washes. The RE-201s appealing sound was influenced by many factors, from the warm compression of magnetic tape saturation to the evolving modulation produced by motor speed fluctuations, friction, and other elements. Last but not least, analog preamp circuitry was a key ingredient in the Space Echos rich sonic recipe.

Now with the BOSS RE-202 you get access to that coveted Space Echo magic with all of its sonic flavour and essential characteristics, realised in flawless detail thanks to intensive R&D and latest technology innovations. Everything has been carefully examined and recreated with all-new algorithms, including the tape path, record/playback mechanism, motor variations, preamp coloration, tape age, spring reverb character, and more, to deliver a true Space Echo experience.

The RE201 Space Echo features a 12-position mode selector and three-head configuration plus additional tape head for 12 unique echo combinations. With the selectable Tape age control you can can get a brand-new Space echo sound, to the worn character or a well-loved vintage piece. Dedicated controls on the right of the unit for Bass, Treble, Reverb, Repeat Rate, Intensity and Echo give you total control and all with that flavour; Get those gradual pitch changes when your tweak the Repeat Rate, or the runaway feedback when you dial in more of the Intensity.

On the left of the unit the Wow and Flutter control gives you access to that natural modulation that is essential to the Space Echo sound while the Saturation control make the sound warmer and more compressed as you turn up the knob.

A selection of new features set this apart from the original. There is true stereo i/o, an echo type that changes the distance between the heads, guitar or line input, stereo spring reverb with hall, plate, room and ambience and an expressive Warp and Twist effect for further sonic exploration. In addition there are 4 onboard memories, with 123 more accessible via MIDI program change, Tap Tempo to allow for quick setup whatever the playing environment.

The RE-201 is a true legend, and now you can get access to that Space Echo goodness and much more with this BOSS RE-202 Space Echo!