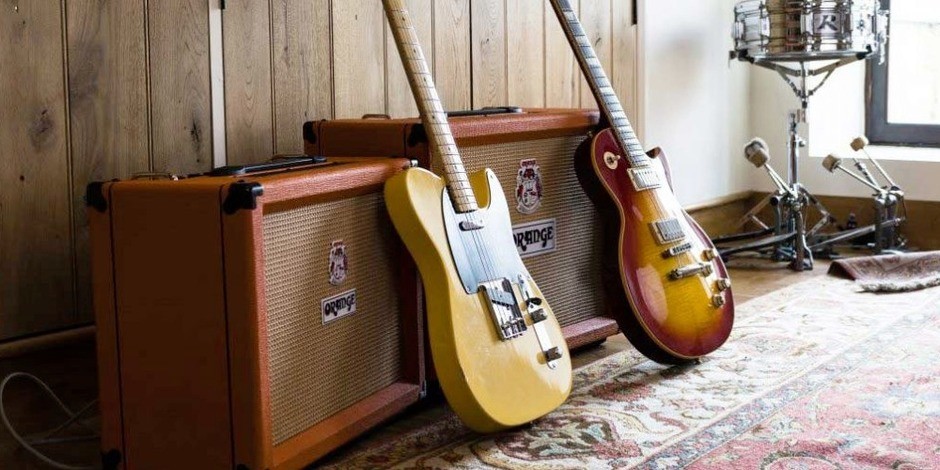 We are very excited about this pair. With so many excellent features such as switchable power, twin channels, effects loop and the iconic vintage charm, Orange may have just nailed the perfect modern gigging amp.

British amp giants Orange have secretly been very busy last year, striving to perfect their recipe for the perfect 'players' amplifiers and now here they are. The Orange Rocker 15 and Rocker 30 are two new kids on the block in Orange's already highly impressive range of amplifiers and send out a message that Orange mean business in 2017.

Ok, so lets get familiar with this new pair of Rockers. First off we have the Rocker 15, an extremely portable combo that is designed to excel in many applications from home to the studio to the stage.

Thanks to a host of truly excellent features this Rocker 15 has really tapped into the lack of a small, two channel, bedroom friendly all valve amps on the market today. The reason why we thing the Rocker 15 will be a huge hit is because it offers guitarists the ability to actively switch between different levels of output, using a three way switch you can change the overall power produced between 0.5,1,7 or 15 watts.

So with the switchable power you can not only use it in your bedroom but when on the full 15 watt mode it will transform into very competent gigging amp! Thanks to a single 10" custom Voice of the World Gold Label speaker and some meaty transformers, the Rocker 15 has a scarily potent delivery which is fuelled by its EL84 output valves.

The Rocker 15 is a contender for Orange's most versatile amplifier ever made! One of the key features behind this title is the fact that it has two separate channels for 'Natural' and 'Dirty' tones. On the natural channel players can expect those sparkly cleans which are perfect for those toned town, mellow moments.

With a traditional looking Gain, Master Volume and a three band EQ control panel, the Dirty channel in this amplifier is very versatile. This channel can either be used as a second clean style sound with maybe that added grit needed for solos or it what would be considered its main purpose would be to turbocharging your sound into that ultimate tube breakup territory for that distorted British fury.

So let's take a look at the bigger brother in this exciting new range. The Rocker 32 is a bigger 2x10" combo that boasts an impressive combination of big sound and a small footprint.

The Rocker 32 achieves this huge sound courtesy of a few blessings both the speaker and power department. The Rocker 32 features a pair of 10" Voice Of The World Gold Label Speakers that can run in both mono or stereo, a cathode follower which adds an extra dimension to the sound and an idealistic 30 watts of power that is switchable down to half power at 15 watts. The combination of all these things leads to a real gutsy bottom end with the chiming highs to go with it.