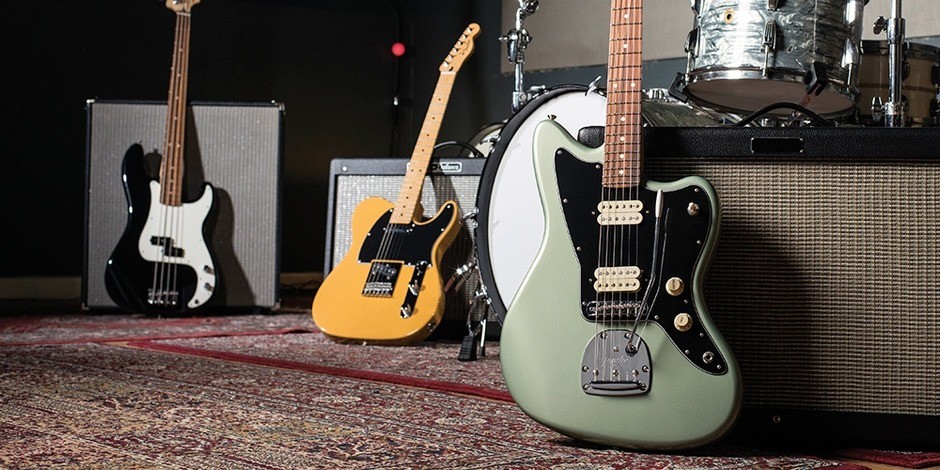 The Fender Player Series is the new linchpin within the Fender range, superseding the ever popular Standard Series. Often imitated. Never duplicated.

The Fender Player Series is a brand new range of guitars and basses that takes over from the ever popular Standard Series (Mexican). Designed and built to deliver a range of classic Fender instruments with the style, function and form that has created legends the world over all whilst maintaining an affordable price point. The Player Series boasts improved specs and a selection of new colour options too.

There are 4 core models within the guitar range; Strat, Tele, Jaguar and Jazzmaster, with a variety of configurations and left handed options available. The Strats all feature a 2-point trem system, new Player Series pickups and a 50s era spaghetti logo on the headstock, with SSS, HSH, HHS pickup layouts available in addition to eye catching Plus Top options and Floyd Rose loaded models.

As for Teles, all models feature 6-saddle string through body bridges, alongside the new Player Series pickups. There is a regular Tele model alongside a welcome HH pickup model (with coil split) for those that want a bit more power whilst maintaining the traditional Tele mould.

The Jaguar has a HS pickup configuration with the Jazzmaster rocking a pair of humbuckers, Fender have also added tonal versatility with the humbuckers being coil split via push/pull pots.

For bass players, the Players Series presents the expected P and Jazz bass options, with 5-string and Fretless Jazz models also available, in addition to a Jaguar Bass for those that want something a little alternative. As with the the guitar range, all the basses feature the new Player Series pickups and a fresh set of colours amongst the traditional Sunburst and Black options.

The Fender Player Series is the new backbone of the Fender range, delivering an array of models and options that will fuel the inspiration of guitarists and bassists the world over.