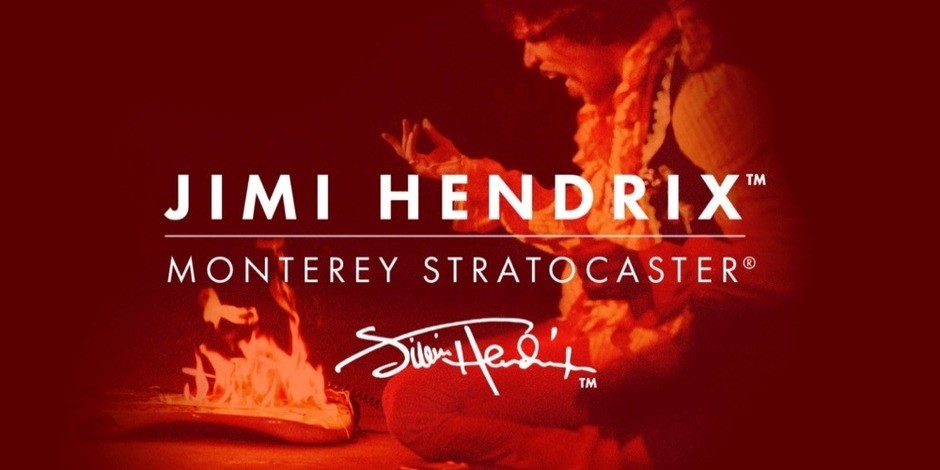 An authentic revival of the guitar used, and set on fire, by Jimi Hendrix during his legendary 1967 Monterey Festival performance.

The year is 1967, Jimi Hendrix in his prime closes his breathtaking set at Monterey Pop Festival...playing riffs behind his back and soloing with his teeth, before turning to his audience and saying "This is for everyone". It was in this moment after covering his instrument in lighter fluid that his custom hand painted Fender Stratocaster was sacrificed by fire in a rock and roll ritual that would go down in history.

50 years later Fender have recognised the significance of this moment and the legacy of a guitar that, although only used by Jimi once, has become the face one of the most iconic, groundbreaking artists of all time.

Used for Jimi's final song, a cover of The Troggs - Wild Thing, this guitar has now become known as the Monterey Strat. An instrument that originally had a plain finish before being customised with 'Nail polish' artwork by hand painted Jimi himself.

With this 50th Anniversary Limited Run model fans can now finally own their own piece of history that not only perfectly replicates this stand out psychedelic finish, but also sports Hendrix's signature on the rear of the headstock and a custom neck plate with an engraved Hendrix image.

The key specs for this Authentic Hendrix collectors item include an Alder body and a C shaped Maple neck, along with a Pau Ferro fingerboard, a vintage style 7.25" radius and 21 vintage style frets. That's right, this axe is designed to play, feel and sound just like Jimi's!