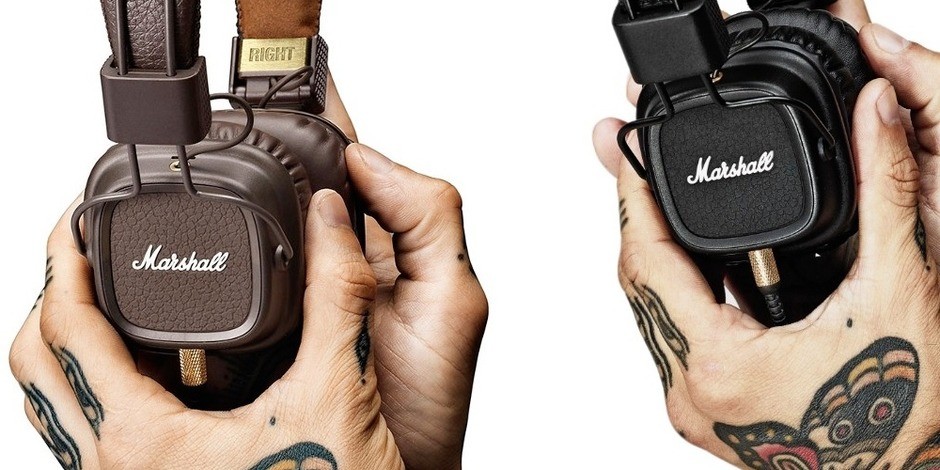 Here's the lowdown on the British amplification legend's headphone range!

That's right folks, the British rock 'n' roll amplification legends make great headphones as well as amps! This post offers an insight into all the models available as well as the key specs and differences that you need to know before buying your very own pair.

Let's begin with the Major II headphones. Available in Black, Pitch Black, White and Brown these are the second incarnation of the most affordable pair of the Marshall range and are a seriously attractive option for those casual listeners and commuters who want stylish, comfortable, great sounding headphones that are also built to last.

As a base model the Major II's boast an impressive spec list without compromising their simplistic, retro aesthetics. Listeners will benefit from a double-ended coil cord with a mic and remote that is also detachable so you can decide which side you prefer to plug in. Better still you can use the empty 3.5mm socket to share your music with a friend!

It's hard to ignore that classic Marshall script logo and what it stands for, therefore it's no surprise that the legendary British sound innovators have used impressive customised drivers for a characterful balanced response with low distortion levels, full bass, detailed highs and a prominent mid range.

The Major II model also comes in a BLUETOOTH model that features Bluetooth aptX Technology and offers over 30 hours of music listening time! Available in Brown, Black and White these head phones give you all the style features and perks of the Major II's and more.

Designed to be the perfect answer to performance requirements of the modern listener Marshall have fitted an understated analogue control knob. Exclusive to the Bluetooth models this button allows you to play, pause, shuffle and adjust the volume of your music as well as control all your phone functions with ease.

Don't worry! These Bluetooth headphones still allow you to share music with a friend by using an included cable to plug them into the free 3.5mm socket...all while you rock out wirelessly.

Next up are the Marshall Mid Bluetooth Headphones - available only in Black. This set share many of the features found on the Major II Bluetooth such as the analogue control knob, on-ear design and of course full phone functionality.

This pair are designed to provide a superior sound with scooped mids for true music lovers and sound connoisseurs. This is achieved using a powerful Bluetooth aptX system that offers over 30 plus hours of playtime from a single charge, 30 feet of wireless range and a set of premium 40mm drivers that give the MID Bluetooths a crisp, pure and detailed sound response.

Being a higher end model you can also expect a bullet proof, ergonomic on-ear fit that is fully collapsible for easy storage or safe keeping.

At the top of the range is the Monitor Bluetooth. Again while sharing many key features of Marshall's other Bluetooth equipped models, this pair take over 50 years of Marshall sound heritage to create a pair of headphones aimed at pro musicians and sound technicians that seek that detailed 'Hi-Fi' sound.

The key upgrades include custom tuned drivers that provide exceptional audio, delivering a near neutral sound that perfectly balances clarity and bass, as well as an alternative over-ear design that offers supreme noise cancelling isolation so the listener can focus on every detail of the music.