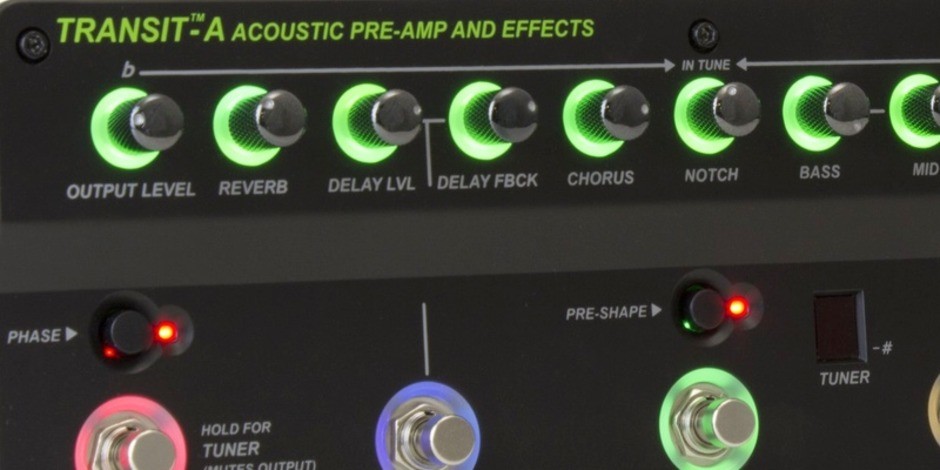 We take a look at the Transit B Bass Preamp and Transit A Acoustic Preamp from Trace Elliot's recent Transit pedal range.

Acoustic artists and bassists rejoice, new for 2017 Trace Elliot bring you the Transit Series. After seeing and hearing the new Trace Elliot pedals in the flesh the team at GigGear have been thoroughly impressed with just how versatile and complete these units are.

The Transit B Performance Bass Preamp is an extreme feature rich pedal and of course with Trace Elliots bass heritage and expertise it is no suprise that this thing covers all the tonal ground you would expect from a bass rig very well indeed.

You will instantly notice the colour coded bright, back-lit control panel which makes navigation around the unit, especially in dark conditions, a simple affair.

The Transit B will react exactly how the user intends thanks to a host of built in tools designed for accurate tone shaping on demand such as the Pre-shape, 5 band semi-parametric EQ and dual band Compressor. The built in drive is of course another killer feature forthose who like their bass line knarly, this part of the circuit features a blend knob so you can dial in your perfect amount of dirt on your low end while a 'Bass enhancement' button is also available for another alternative tone injection on demand.

The Transit B has been created with many uses in mind for different musicians needs and as a result features line level, phones, instrument level and dry outputs, as well as an AUX input and a Pre and Post balanced XLR outputs (with Ground Lift).

The Transit A Acoustic Preamp on first glance shares many similarities with the Transit B including the same large rugged chassis, backlit control panel and versatile connectivity.

On further inspection this 'A' model is an extensive acoustic sound platform with very intuitive controls. First off you have an integrated, studio quality ‘soft-knee’ compressor with adaptive attack and release times for superb clarity and sustain. Working in harmony is an arsenal of effects specifically voiced for acoustic guitar - chorus, reverb and delay with tap tempo are available on demand for when you need to add that subtle or atmospheric charm to your playing.

Like something you would find in a pro studio, the Transit 'A' offers a 3 band EQ which can be manipulated and tweaked to suit different guitars, rooms or set ups. Also wired in is a hand volume boost switch and a piezo button for increasing input impedance. Take further control still with a central notch knob and phase reverse switch control which will help tame any unwanted feedback. Something live acoustic guitarists are often plagued with!