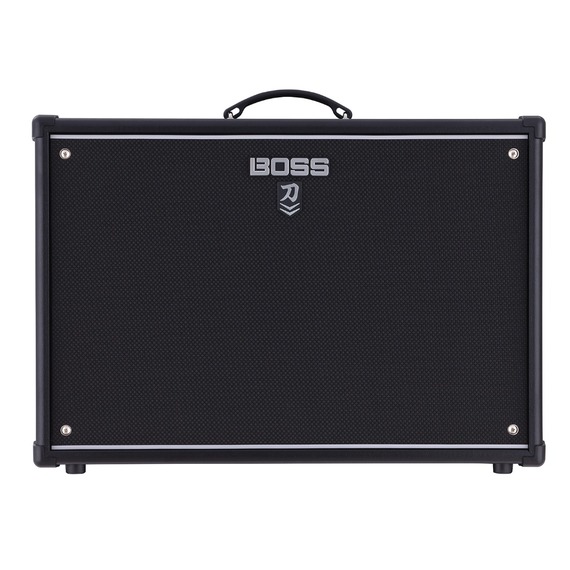 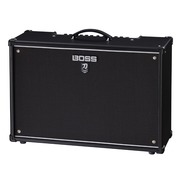 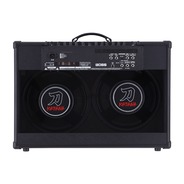 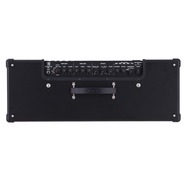 The BOSS Katana 100 212 MkII is a 2x12" 100 watt guitar combo. It takes the acclaimed first generation model to a new level with more sounds, more effects and more features...and thanks to its adjustable power control, taking you from 100w to 50w right down to 0.5w, it's a superb amp for stage, studio or home!

This MkII version pickups up from where the original version left off, with 5 primary amp characters; Clean, Crunch, Lead, Brown, and Acoustic (for acoustic-electric guitars). Clean brings natural and transparent tones, Crunch gives added grit, Lead will take you from blues solos to searing rock leads, Brown is derived from the Waza amp, great for high-gain tone and finally Acoustic is optimized for electro acoustic guitars. The tonal options have now been extended, with each of the 5 primary amp voices featuring newly voiced variations, fundamentally giving you a total or 10 amp characters (double the amount on the previous generation).

Utilizing BOSS's Tube Logic approach, the Katana 100 212 MkII is able to produce the authentic tone of genuine tube amps, with the tube like feel and sound changing and becoming richer as the volume increases. The handy Power Control allow you to achieve that cranked amp tone and response at super low volumes, great for home use.

BOSS have also improved the effects section, now giving you 5 simultaneous effects categories. The 5 independent sections Booster, Mod,, FX, Delay, and Reverb come ready with 3 variations in each, a total of 15 ready to play effects. Connect to the BOSS Tone Studio and you can delve much deeper, customising the sections with over 60 different effect types, with access to changing the order of the chains and more! Once you have you amp character set and selected your effects setup you can store your custom setup one of the 8 Tone Settings for instant recall.

Stereo Expand is a new feature that has been added to this MkII model, allowing two amps to be linked....one Katana MkII 100 sounds great, but two at once is even better! You can control everything from the master amp, with stereo effects like chorus, delay and reverb being distributed across both amps for a huge immersive sound.

If you have a favourite preamp or multi-effects unit the Katana 100 212 MkII can also function as a standalone powered cabinet. Simply connect to the rear panel Power Amp jack, which will bypass the amps own preamp and effects, whilst still letting you tap into the Tube Logic power section.

Can the stereo expand function be used by using my current 100w 2ï¿½12 Katana as the slave amp if I bought a Mk2 version? Or do both amps in the chain have to be a Mk2? Thanks in advance Richard.

BOSS say that "Two Katana 100 MKII units can be connected for stereo....." Looking into this, there is no real infomation on it but as the power amp in input is used on the slave amplifier, it would lead you to believe that the function is simply sending a "Left hand mix" to the slave amp meaning any amp could be used. We will endeavour to test this in person ASAP.