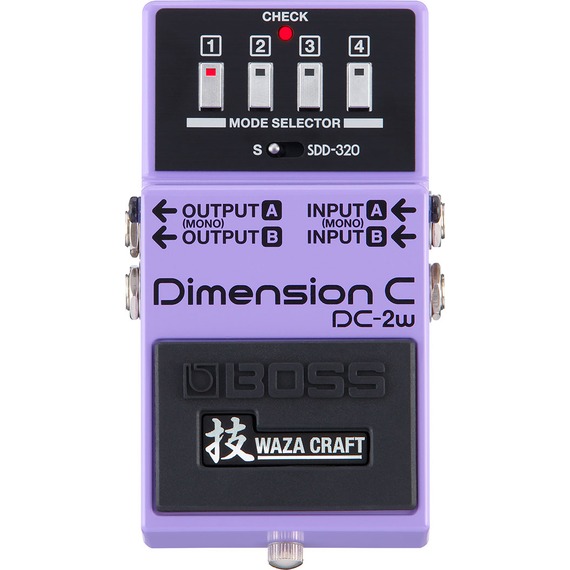 Built from the original circuit designs and updated with Waza Craft mojo, the DC-2W Dimension C pedal delivers that highly sought after Dimension sound experience. This DC-2W utilizes very unique spatial processing that magically enhances the width and depth of any sound you put into it - be electric guitar, acoustic guitar, bass, keyboards or even vocals.

Often confused as a chorus effect, the Dimension effect, though time based like chorus, manages to enhance the width and 3d spacing of your sound without any obvious modulated movement (unlike a chorus effect). A truly enriching effect without ever sounding over processed.

The DC-2W has a simple user interface with four preset switches that provides instant sonic variations. Whilst four presets may seem limited, you actually have access to 20 different Dimension variations as two presest can be used at once, plus there are also the two modes S and SDD-320.

The S mode delivers the exact sound of the original DC-2 pedal. The original DC-2 was derived from the Dimension D rack unit, but the DC-2 was created for mono sources like guitar, and features a modified circuit that produces a Dimension effect with a slightly different tonal flavour. The SDD-320 mode captures the magic of the secret weapon tool used by audio engineers and producers the world over - the Roland SDD-320 Dimension D. Used on guitars, pianos, synths, strings, vocals and more it added spatial landscapes and sonic glue with that "modulated" processed sound. With its modern switching, the DC-2Ws SDD-320 mode enables six sound variations when two buttons are pressed, including four in-between sounds and two all-new voices.

With is Waza Craft mojo, made in Japan quality and premium appointments, the BOSS DC-2W will be a welcome addition for may players effects department - giving access to a magical effect heard on albums the world over.