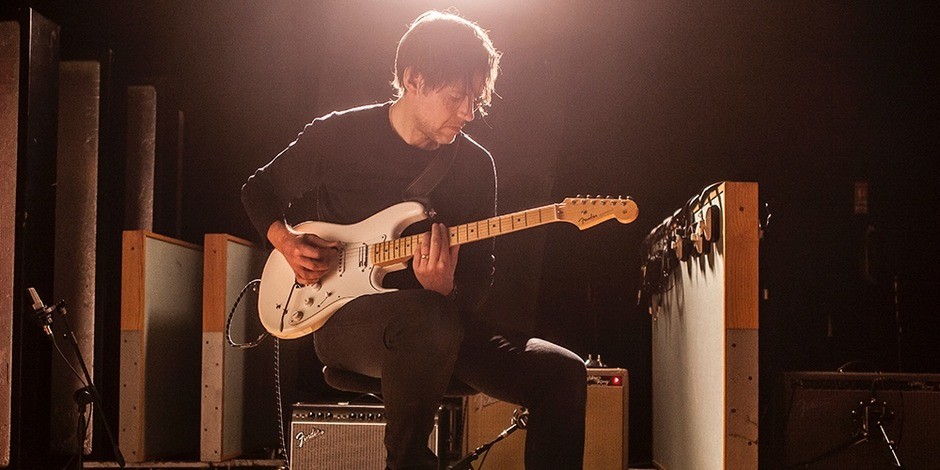 Necessity is the mother of invention and with Ed O'Brien's all new signature Fender EOB Stratocaster you have an instrument that offers a vast and unique tonal palette inspired by his trusty modified Clapton Strat.

Fender introduce the all new Ed O'Brien EOB Sustainer Stratocaster! After a close relationship with Fender for many years, the legendary Radiohead guitarist has finally been invited to create an instrument with his personal specification that has inspired so many of Radiohead's groundbreaking sounds.

When interviewed by Fender Ed talks about how, back in 2000 during the writing and recording of Kid A, the band decided to throw convention out of the window and began moving away from guitars after purchasing a host of synthesizer and keyboard equipment. Somehow Ed wanted to incorporate the guitar but with a fresh, dynamic approach that would break the mould.

After putting his vision to guitar tech, Peter “Plank” Clements, they discovered this unique Sustainer pickup by a company called Fernades and had it fitted to his trusty Eric Clapton Signature Stratocaster. This modification suddenly opened up a vast array of sonic textures never before explored and Ed quickly knew he had a special instrument. This guitar then became pivotal to Radiohead's music as O'Brien went on to use it religiously for live performances and future records such as In Rainbows, Hail to the Thief and The King of Limbs.

When the opportunity came for Ed to make his own signature model he knew he had to make this special configuration available to the masses. The guitar had to be a Strat with Ed believing that it's basic specifications are perfect for a player who likes to use effects due to the way it doesn't colour your sound, while the differences in the pickups mean it can cover a lot of tonal ground.

For the signature Fender and Ed took the versatility a step further. Of course the Fernades Sustainer, the inspiration for the guitar, has found it's way into the neck and offers harmonic-only, fundamental-only and blend modes which can be operated by switches on the lower bout. Added versatility come courtesy of a Texas Special single-coil middle pickup to offer those classic spanky Strat rhythm tones and a Seymour Duncan JB Jr. humbucking bridge pickup for fatter sounds.

Ed is deeply proud of his and Fender's creation saying "Im excited about the prospect of it falling into the hands of someone who will do extraordinary things with it".